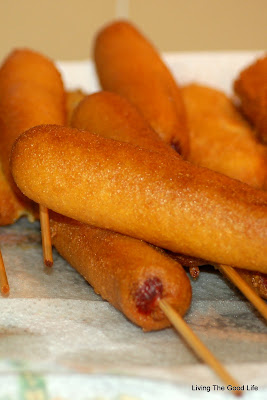 I've never attempted homemade corn dogs.
I just saw a neat recipe on ALLRECIPES.COM that sure sounded easy.
I like finding recipes that have at least 4 1/2 stars w/ tons of reviews.
Always make sure you read the reviews, because sometimes people will give a recipe a 5 star rating but change 10 things to the recipe.
Click the link above to see the recipe. 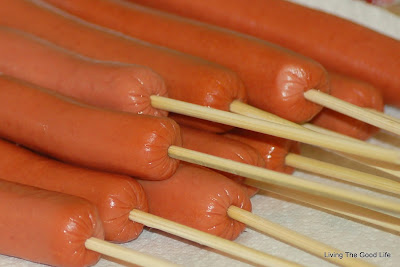 I bought the only skewers I could find...which of course would have made great foot long corn dogs. I just used the wire cutters and snipped off the ends.
I couldn't make foot longs because my pan wouldn't hold them....and it was a large pan. 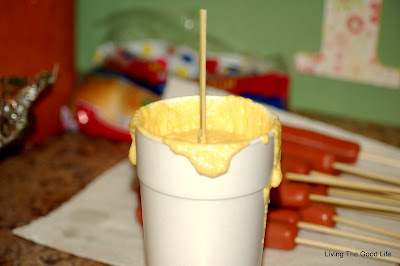 In the reviews, I lucked out and a reviewer was an old Carny....who made corn dogs.
He said to make sure you have the batter extra cold.
So, while I was skewing the dogs....I put the batter in the freezer.
Mr. Carney also said to DRY OFF THE DOGS...so, there I was patting the little pups
with a paper towel.
Another reviewer said to use a tall container...well, it just so happened that
I stopped and got a malt on the way home and had this Styrofoam cup...just
waiting to be recycled.
The batter all fit in the cup....UNTIL I put it in the freezer....
THEN IT GREW AND GREW AND GREW....
So, don't put ALL THE BATTER in a cup....you'll be cleaning up a mess.
I wasted a lot of batter because it was too thick....I think from the freezing...
So, make sure you add more milk if needed to make
it more along the lines of somewhat runny pancake batter. 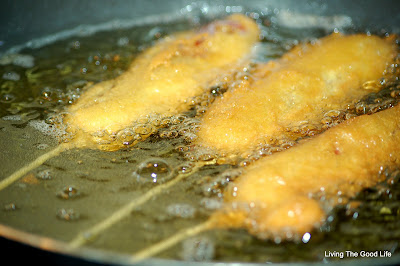 Because if you don't....you will have really weird PUFFY corn dogs. 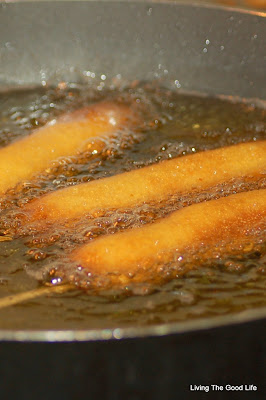 I finally got the hang of it..and they started looking more like what you get at the fair. 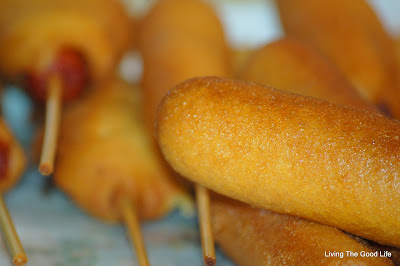 The recipe was awesome and I will be making them again....
I should just make them up and keep them under a heat lamp while we are at the
fairs this fall.....

I think I'll try this since you've already done the trial and error part! :)

They look awesome Traci!! Thanks for sharing the techniques you used. I will try this recipe for our mini corn dogs I am going to make (and of course, we will finish the meal with funnel cakes :)

Wow. These look great and that's absolutely my favorite thing at the fair! I'm gonna try it! Wish me luck! :)