Who You Gonna Call?

My parents have a nice pool. The nice pool is a pain in the butt.
Each year, they wait until right before July 4th to open the pool because Oklahoma spring storms wreak havoc on a pool and its chemical balance.
So, they've discovered that waiting until almost July is CHEAPER and EASIER in the long run.
This year, there was a malfunction w/ a drain. No matter how fit one is, they can't hold their breath long enough to do what needed to be done in the 12 ft. deep part of the pool.
So, who you gonna call?
Your local pest control guy, right?
RIGHT!
This is Grover.
Grover is the owner of Admiral Pest Control.
Normally, when Grover is at my mom's house, he is spraying for bugs!
In Grover's spare time, he likes to scuba dive...he has been all over the world scuba diving and takes amazing underwater photos.
Grover has NEVER been scuba diving in my parents' pool! 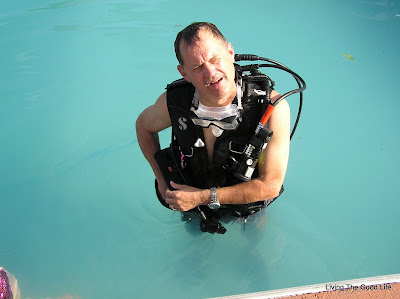 One thing Grover didn't expect to have to do while helping with the pool was to do PEST CONTROL! 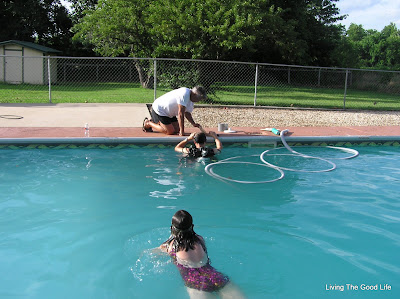 Look at that PEST sneaking up on him....GROVER!!!
Turn around, look, it is a BIGGIE come after you!
It is attempting a sneak attack! 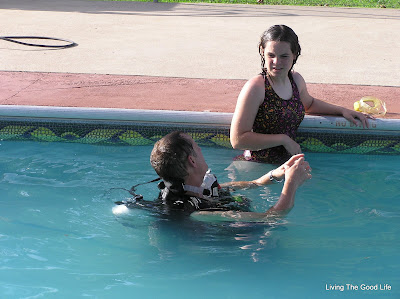 Now look! He is having to do PEST CONTROL!
He just thought he could tell her a few things about scuba diving and he would be done! 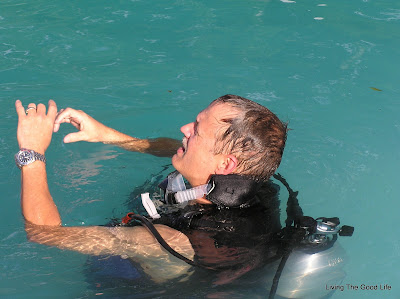 In between PEST CONTROL he tried to tell my dad about the PROBLEM with THE POOL.
Except he had another PROBLEM...er, uh, PEST. 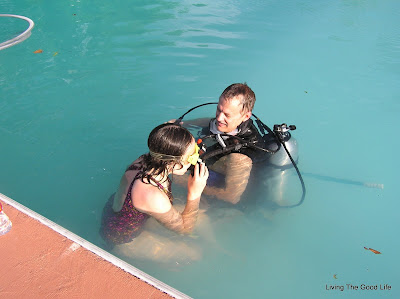 The PEST even talked him into letting her try the air tank.
Thank goodness he had TWO breathing thingies....I would have
got the heebie jeebies at this point. 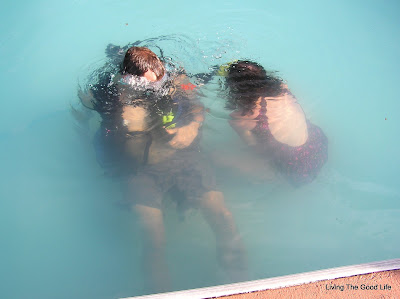 Testing to see if the PEST can breathe under water! 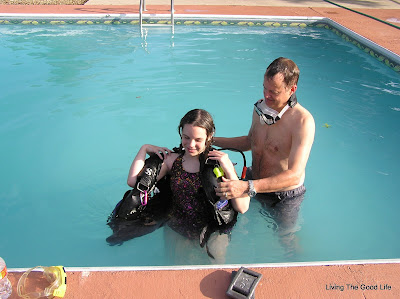 Dang! Did poor Grover get sucked in or what?
She is such the queen of DIVERSION...."if I seem totally interested in what the guy is doing, I just KNOW I will get to try the scuba gear out." 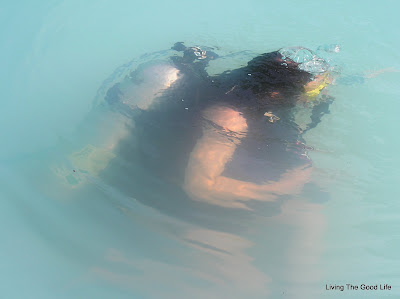 Going under and staying under was harder than it looked!
Does the PEST CONTROL guy even know what he has NOW CREATED? 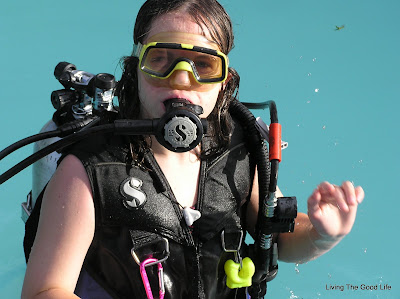 An underwater breathing, swimming, gotta take scuba lessons SUPER PEST!!
There ain't no killing this PEST now!!
THANKS GROVER!!!
On a side note: The pool is fixed and clear and we had a great family reunion on the 4th!

Traci, cute post! You know my son lives in Stillwater and has an awesome pool himself. he had it going in June when we were there though.

Now I know what you are going to be doing this year in school. :)

Super cute! I love this one!

that is going way above and beyond Grover!

That's funny! Looks fun though. Stop over..have not seen you for awhile--oh and happy weekend to you! :)

How funny!! But, IM so jealous you can actually enjoy a pool with this heat!! :)

I must've missed this post.
I giggled over Grover the scuba guy...in the swiming pool...to fix it!
Love the post!