The AFTER of the BEFORE Project! 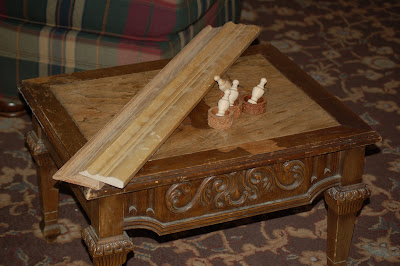 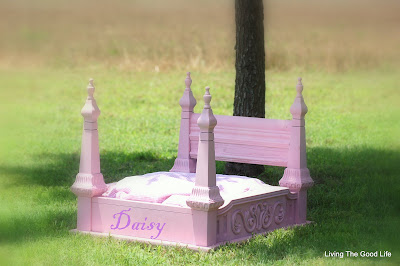 Thanks to Ki, at JUNK CAMP for the inspiration for making my little princess Rat Terrier, Daisy, her very own four poster bed!
I would have a picture of her IN THE BED, but she cannot STAND cameras.
She can tell that you are getting the camera even before you pick it up....and the only picture you get is her slinking away....like a poor abused dog.

I want to thank my husband, David, my friends, Bobby and Kevin for helping by using the tools....I can't BELIEVE I didn't have the camera when they were drilling and gluing. Their conversation could easily have been mistaken for REAL MAN TALK....'cept they were making a DOG BED...that is what made it so funny.
They were quite serious about it...and if you knew these three, making a dog bed is something NO ONE could ever IMAGINE THEY would be caught DEAD doing!!!
Well, they DID and HERE is the proof....THANKS GUYS!!!

TOTAL COST OF PROJECT: $23.00...only because it took 3 cans of PRIMER to cover that dark wood, otherwise it would have been less than $20.00

I bow in adoration... We're not worthy!

That is the cutest thing I've ever seen Traci! I bet Sadie would love one of these!

What a cute bed!
I love it!Do you supose it would be degrading to make one for a male dog? lol!

I love this project! I truly wish I had a dog smaller than a German Shepherd so I could make one too. What a cute doggie bed.

I absolutely love it! My Bear is the same way...knows you're going to take a picture before you pick it up!

Hey Traci. It's Debi (Troy's Debi). I'm new to this blog biz, how do I "follow" you (if that's what it's called)? I have a blog too doubledramamomma.blogspot.com. Not quite as awesome as yours, but still a rookie!

How darling! What a lucky doggie! Very creative.

That table looks like ones that Keith and I had when we got married. Very cute.
Kim

I saw the pics you posted of this on Facebook! It really is sooooo cute and totally creative! Love it!

wow, that is so cute!

That is the cutest dog bed I have ever seen!

Ok, this is totally NOT what I was expecting you to do with your project BUT it's so adorable! What a GREAT idea!!!

That is crazy cute! I never would have thought of that!
Thanks for joining TST :)

Leigh of Tales from Bloggeritaville said...

I LOVE that! Seriously, if you make another...I would buy it from you. I have five dogs, I guess I wouold have to let them fight out who was the "queen" of the bed. How adorble. And who woulda thought of it? I am going to have to give you some props tomorrow on my post too. Amazingly clever. Now I will look at end tables in a differnt way! YOU.ROCK!
Thanks for participaing in Thrifty Thursday this week! I was late in posting the links, so forgive me. It's my fault that you may have some late visits.
Thanks for partcipating. Next week I will be back on a good schedule!

I just love that bed and if you made it in a big girl size my daughter would be all over it!!(I would too!!)
But wouldn't the end table to start it from be scary in itself?? LOL

This is just an amazing idea!! I would laugh at a dog bed like this in a shop, especially if it was selling for $79.99 or more as I am sure they are, but now I know how to make one!! Yahooo!! THANKS!!

I have a Rat Terrier too!! You can see Milo on my blog anytime, he is a ham!! ;-) I would love to see Daisy...maybe you can sneek a pic when she is sleeping!! LOL!

Hi there....I just popped over from Leigh's Bloggeritaville and LOVE your blog and have added myself as a follower. The dog bed is precious! I need to learn how to you some tools so I can create stuff like that. I can paint but not so much else. :)

Have a great weekend!

That is so cute! What a great idea.

OMG!!!! I love it...can you make a BIGGER version for my new Granbabe! Love your bloghome and will be back to visit again! Happy VTT and CREATING to you!

That's a cute bed, but the ends of the posts look kind of lethal.

I've loved this idea ever since I saw it on Junk Camp, and yours turned out magnificently! You better keep those power tools out, because you did a great job!

LOL! Brilliant, I didn't see that 'after' coming at all! I hope your pooch loves it!It is fit for a princess

OH MY! I lovvvve this. Now I just have to find a table big enough for my tub of fun, Murphy Grace.

He isn't camera shy like yours, but he gets too close because he wants to lick it!

Fantastic results. Your dog must be quite the little princess!!

The little bed is probably the cutest thing I've ever seen. I love it. Such a lucky doggie is have such a bed. Happy VTT, have a great weekend.

This is so adorable! Nice work! My chihuahua would hop in that bed in a second...if I could convince her that it was a bed for PEOPLE only :)

GORGEOUS! I wish I were so creative! :o)